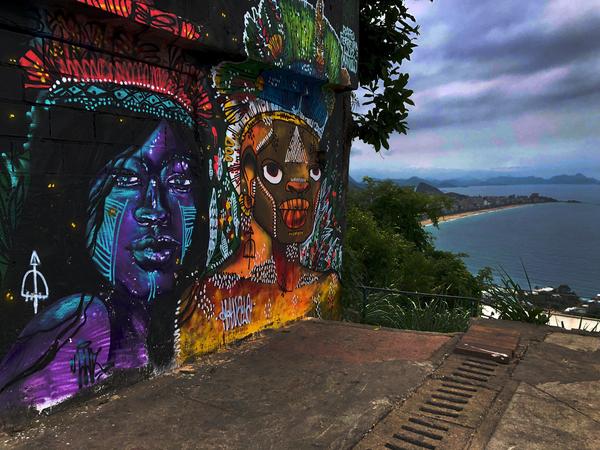 Changing the narrative in the favelas of Brazil

How community tourism is leading the way in Rio de Janeiro

by Daniel Noll and Audrey Scott Posted on 21 August 2019

Behind one goal of the Vidigal community concrete football pitch: colourful street art murals including a bearded old sailor peering through a pirate monocle and a warrior wielding a crystal sabre. At the opposite end, a well-detailed cartoon cat carrying an extension pole paint roller, sitting aside a supply storage cabinet made of steel.

Russo, our guide, had spent his entire life in this Rio de Janeiro favela. With that local perspective, he placed everything we’d see into context.

As for the football pitch, he and his friends worked to build it when they were young. “We just wanted a place to play,” he said.

But later, the pitch fell into disrepair and then into the hands of a local drug gang.

Today, the area is not only used once again used as a football pitch, but it also serves as a practice area for a local youth percussion group and a makeshift studio for a local artist who recycles trash into pieces of art, furniture, and installations.

Through engagement and community evolution, the neighbourhood has changed. So, too, has what travellers might see, learn and experience when visiting Vidigal. And a new genre of social impact tourism in the favela is playing a role in all this.

At this point you might ask: “What were you doing visiting a favela in Brazil? Is that safe? And is it possible to do a favela tour in a respectful way?”

Favela tours and tourism in Brazil are not new. However, the model used to be one featuring guides from outside the community and tour buses speeding through the favela to accentuate how dangerous and untouchable it was. Little money and benefit from these tours trickled back to local businesses, residents or organizations in the favela.

Fortunately, thanks to Planeterra and its local partner, Favela Experience, that model is changing. Community organizations and micro-enterprises are the core of this favela tour. They create and deliver experiences that highlight the culture, stories, and people of Vidigal favela — all grounded in respect, exchange and positive impact. These feature human interactions from leaders who grew up in the favela and developed a sense of leadership borne of their experience. In addition, money from tour fees helps provide a sustainable revenue stream for the community organizations involved, and a portion is also used to help develop and train new ones.

Russo, one of the first local guides from the favela, began working in tourism because he saw outside guides escorting travellers around his community. He wondered what they were saying about his home, particularly since they had never lived there. Instead, he wanted to share with real stories, personal stories, different stories with travellers than those that were usually told about the favela.

“I want to demystify the favela,” Russo said. “Yes, there are bad things here. But there are more good things.”

A lesson in Afro-Brazilian martial arts — and equality

In this Planeterra and G Adventures favela tour, travellers are able to learn the basics of capoeira, an Afro-Brazilian martial art that combines acrobatics, dance and music, from a community organization working with around 80 local youth and adults. As we learned more about capoeira we understood that it’s more than just a physical activity. It borders on a life philosophy, and dates back several centuries to the northeastern part of Brazil when African slaves were forbidden to practice martial arts. In response to this restriction, they developed a new art form, one whose messages and values are still resonant to and important in the favela today.

“In a capoeira circle, everyone is the same; there is no social status,” Messias, a capoeira master and founder of Vidigal Capoeira explained to us. “They [the students] see firsthand the power of capoeira to bring different people together regardless of country, size or social status.”

Learning the rhythm of Brazilian drums

Another opportunity for travellers is to get their hands on drums and learn some of basic beats and rhythms of Brazilian music through a percussion class. For Isis, the dynamic founder of the youth percussion school Batuca Vidi, her passion for music and drums helped her get through some difficult times and provided her with opportunities.

It’s remarkable to think this all began during one of her practice sessions on the street when five local kids approached her and asked, “Can you give us a class?”

She hopes to provide a similar path to her 30 students who train with her at Batuca Vidi. Creating music together with travellers is one way to help make that happen.

Nature, green space and urban forests may not be the first thing you imagine when you think of a favela. That’s what makes the Vidigal Ecological Park such a unique place, and such an essential story and feature of the experience.

This urban forest on the edge of the favela was once a trash dump and the scene of a tragic landslide. However, in the course of three years, more than five tons of trash were cleared away thanks to the work and community initiatives of Paulinho, the caretaker of the Vidigal Sitiê Eco Park.

Today, travellers get to enjoy the green space and tranquility of the park as Paulinho provides an impromptu lesson in natural medicine and herbal remedies, allowing people to taste various herbs, fruits and vegetables along the way. He’s a positive energy force who believes in the healing power of nature just as he considers his role as that of protecting nature for others.

Enjoy a locally brewed craft beer with a view

At the close of the experience, travellers have an opportunity to relax and reflect on a rooftop with a view over Rio and a locally brewed Vidigal craft beer. When we visited we had a crisp pilsner, a perfect antidote to the Brazilian summer heat. We’ve heard that the IPAs are pretty spot on as well.

Made by Luciano and his wife Nilda, Vidigal Beer began as a passion project and experiment. Today, the couple is able to professionally craft brew several different styles of beer in the favela and support their family along the way.

A travel experience that helps change the narrative

Over the course of just a few hours on this tour in Vidigal favela, the interactions and conversations travellers have with these community leaders and organizations may help to replace the narrative of “otherness”, poverty and danger with the story of human beings, making their way and trying to provide a better life for their families.

The origins of this tour are deliberately local, based on the personal narratives of residents and experiences of local community organizations. Yet, so too is the conclusion, whereby economic and social benefits remain in the community.

The Planeterra Vidigal favela experience offers a unique contextual travel experience for G Adventures travellers. The approach helps to turn favela life inside-out, highlighting the humanizing view of people making their way over a more traditional narrative, and doing so for the benefit of all involved.

Beyond the favela, the experience leaves a traveler with a deeper impression and understanding, something impactful that they were a part of, an experience to reflect on.

Check out our small group tours to Brazil here. 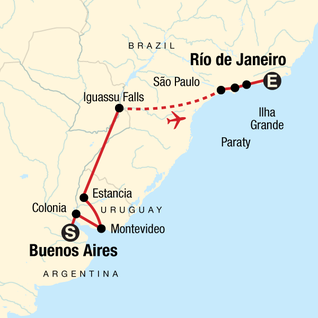 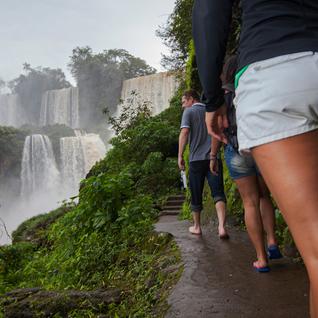 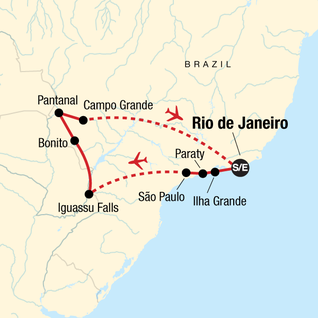 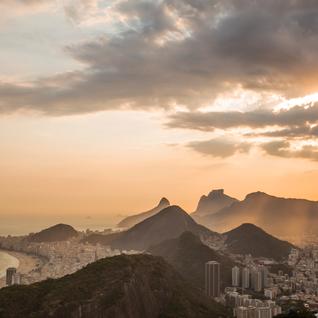 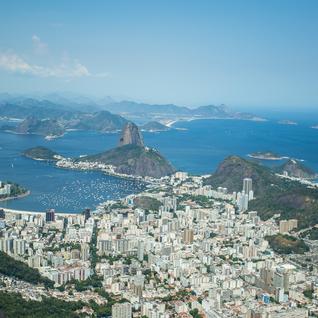