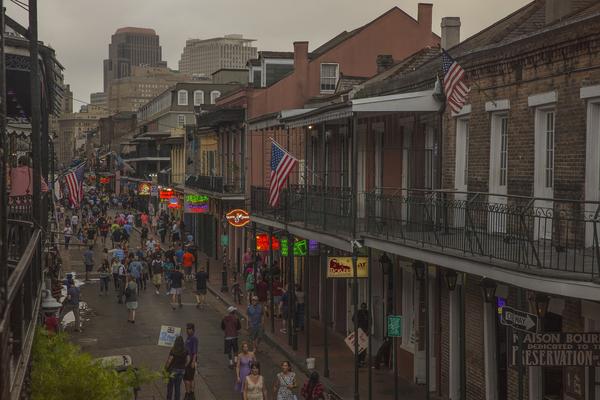 5 of the best bodega, gas station, and grocery store eats in the U.S.

In the States, some of the best foods are found in unexpected places

by Jessica Bloom Posted on 05 September 2019

If you’re looking for a new hidden gem restaurant, it helps to consider that your next favourite snack spot might not be a restaurant at all. This is because some of the best food can be found at America’s bodegas, convenience stores, gas stations and markets off the beaten path. There’s no white tablecloths or fancy cocktails, but you could end up eating the best shrimp creole of your life sitting on a curb. This is a true story. I think about that shrimp creole from Verti Marte in New Orleans almost every day.

You don’t have to take my word for it — there’s actually academic research to support this claim. Economics professor Tyler Cowen wrote a whole book about searching for high-quality meals in unexpected places. He says that storefronts with lower rent (i.e. not in a touristy area) and/or an alternative source of income (like a convenience items) can focus on unique menu items rather than worry about appeasing the lowest common denominator. This is why you often find the same menu at popular restaurants. Chicken fingers and fries, anyone?

Ok, there’s nothing wrong with chicken fingers and fries from time to time, but when you have adventure in your heart, it’s usually in your tastebuds as well. Head just a bit outside of town, step through a door that sets off a chime and turn left at the stack of dusty bar soap — that’s where you’ll find food that will make a lasting impression.

From New York to Los Angeles, here are some of the best non-restaurant places to eat when you’re travelling around the United States.

If you’re not looking for Verti Marte in the French Quarter, you could walk right past it. From the outside, it just looks like a little grocery store with drinks and cleaning products. Head to the very back, however, and you’ll find a chalkboard menu on the wall that lists out daily specials. The food, in metal trays covered with saran wrap, has earned a local following because it’s fresh, homemade and relatively cheap. Plus, you can get it delivered 24/7 which is very helpful after a long day of drinking daiquiris on the street.

Recommendation: All that Jazz po’boy with turkey, ham, shrimp, mushrooms, tomatoes and cheese on a sesame bun with secret sauce.

Southwest of the famous Las Vegas Strip, there’s a taco place in a gas station that’s a local secret. Chile Verde is run by chef Carlos Cervantes and his wife; they take pride in their fresh, cooked-to-order menu of tacos, burritos, tortas and enchiladas. In a city that’s known for some of the most expensive food in the world, it’s also helpful that Chile Verde will fill you up for just a few bucks.

Recommendation: The breakfast burrito is a great way to start the day — gooey cheese, scrambled eggs, meat, and, of course, green chile.

North of Detroit, technically in a town called Troy, the Korean cafeteria in H-Mart is worth the trip. It’s definitely more than your average seating section in a grocery store with window that serves up piping hot bowls of bulgogi, bibimbap and ramyon. The tables are communal, which adds to the family vibe of this dining spot. You can also shop for hard-to-find Korean items while waiting for your order.

Recommended: Classic Bulgogi that comes with sides of soup, kimchi and pickled vegetables.

New York is full of bodegas and delis serving up mouthwatering food, but there’s something special about Sunny & Annie’s in the East Village: They’re known for their sandwiches, but they also have a sense of humour. The bright, colourful signs advertise the Mr. Bloomburger, the Biden, the Obama and the Mona Lisa — just to name a few. And, like many delis, this place is open around-the-clock.

Recommendation: The P.H.O. Real sandwich features all the ingredients you’d find in a hot bowl of pho.

Less than ten minutes from the airport, Zam Zam Market is a family-operated grocery store that also serves homemade food. The dining area isn’t high on ambiance, but the kitchen whips up some of the best Pakistani dishes you’ll ever eat. Zam Zam doesn’t have a menu, however, so you have to be flexible when you show up for takeout or dine-in. From biryani and kababs, all the options are full of spices and flavour, and are easy on the wallet.

Recommendation: The chicken biryani is usually available and will dazzle your senses.

Check out our small group tours to the United States here.